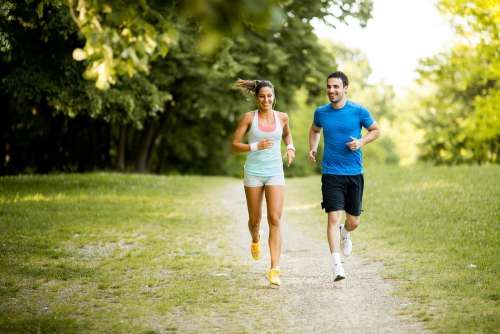 Lack of exercise and what you can do about it

They are everywhere and certainly without lack of exercise: young people, mostly between 15 and 25, who walk around staring at their smartphones. Although this can sometimes be annoying or even dangerous when the hunters are so engrossed in their game that they are no longer aware of their surroundings, it does have a positive effect on health: anyone who chases the little monsters gets a lot of exercise.

Older generations usually can’t do anything with the hype, but for them it is almost more important to cover enough miles every day to prevent serious health consequences.

Why we do not move more?

The human body is designed to move a lot. This is the only way to keep all the important muscles and organs as well as the metabolism functioning properly and efficiently. In earlier times, there was no way to avoid getting enough exercise: even to meet basic nutritional needs, people had to walk considerable distances.

The more technical development progressed, the more such aisles became obsolete. Nowadays, you can get almost all your groceries in the same supermarket, and most of the way there is by car. Online mail-order companies do the rest: You can buy all kinds of things without even having to get up from the sofa.

Moreover, many people work in offices where they sit in front of a PC all day long. This means an extraordinary and for the body so not foreseen load on the back and neck muscles.

Lack of exercise – What are the consequences?

How much lack of movement harms the body is at first very little noticeable. It is a creeping process, at the end of which, however, there are terrible diseases.

The first signs are often tension, which then leads to headaches because the hardened neck muscles no longer supply the brain with oxygen properly. Those who move too little also weaken the cardiovascular system. This leads to high blood pressure, and the risk of strokes and heart attacks increases significantly.

Metabolic processes are also slowed down. In addition to constipation and obesity, in the worst case this can promote cancer, as stored fat cells produce corresponding hormones. So it is extremely important to burn as much energy as you supply to the body.

What can be done about lack of exercise?

Simple answer: sport. Many people do far too little exercise, even in their free time. Instead of covering even the shortest distances by bike or on foot, they drive them by car. Or they do not leave their homes at all. Those who change their habits here will quickly notice a positive effect. There are also many trendy sports (mountain biking, inline skating, Nordic walking), which make it easier to get started with sports.

Because exercise is not only good for the body, but also for the psyche. Hormones such as dopamine and serotonin are released, which make you feel more balanced and happier.

You can also organize your daily work routine in such a way that you do something good for your body. Those who sit in front of the PC should simply get up more often and walk a few steps. True miracles can also cause a balance cushion. This keeps the muscles moving and can even be used to train them during working hours.