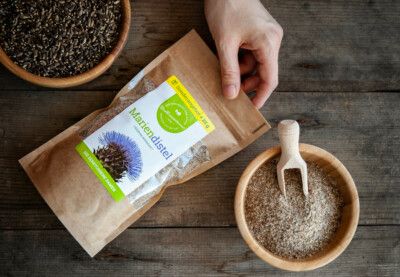 The herb called milk thistle has been used by our ancestors for centuries in folk medicine. But what came to light when scientists focused on it? We have seven effects of milk thistle for you that have appeared in various expert studies!

Milk thistle is a tall thistle with elegant purple flowers. Why it is unique? It contains a number of powerful antioxidants, collectively known as silymarin. This complex of active substances has antioxidant, antiviral and anti-inflammatory effects.

Traditionally, milk thistle has been used mainly to treat various liver diseases (or as part of their prevention), to regenerate this organ, or as a tool to regenerate and completely detoxify the body.

However, what have scientists found out about this herb?

Effect no. 1: Protection of the liver

As for the effects of milk thistle, experts are most interested in its effects on the liver.

It is regularly used as an adjunct therapy in people who have this vital organ damaged by diseases such as fatty liver, jaundice, changes due to alcohol consumption and even cancer.

Studies to date have shown improvement in liver function in people who have taken milk thistle as a dietary supplement. In addition, they suggest that the herb may help reduce liver damage and inflammation caused by free radicals.

One study also found that milk thistle can slightly prolong the lives of people with cirrhosis of the liver. Of course, it is still necessary to further research its effects.

As a dietary supplement and as a means of stimulating the liver and its functions, milk thistle is definitely promising.

An interesting fact: In order for milk thistle to bring about all the necessary positive changes in your body, it is worth using it as part of a 12-week course of treatment. Read HERE how it works and what effects you can observe after 2 or 6 weeks.

Effect no. 2: A younger brain

We don’t usually associate the effects of milk thistle with the brain. And that is a pity. Indeed, its anti-inflammatory and antioxidant effects suggest that it may prevent the deterioration of brain function that accompanies aging.

In animal studies, silymarin has been shown to prevent oxidative damage to brain cells, which may help protect against mental decline.

Scientists have also found that milk thistle can alleviate some changes in the brain of animals with Alzheimer’s disease. Now scientists will focus on confirming the results in humans.

An interesting fact: In order for your body to truly benefit fully from the effects of milk thistle, you need to select this herb from proven growers and producers. This is the only way you can be sure you are getting a high-quality product with the maximum dose of beneficial silymarin.

Effect no. 3: Strong and healthy bones

Another area that milk thistle research focuses on is our bones, specifically the effects of milk thistle in people with osteoporosis.

Animal studies have shown that milk thistle stimulates bone mineralization, which can prevent bone loss. In addition, the herb could provide promising results in studies focused on medications or prevention of osteoporosis in post-menopausal women.

An interesting fact: You can get milk thistle in different forms – tea, pills, oil or ground fruit. Which of these forms provides your body with the most beneficial substances? Read HERE for the best way to take milk thistle.

Effect no. 4: Supporting the treatment of cancer

The antioxidant effects of silymarin have also attracted the interest of experts in connection with the treatment of cancer.

Some animal studies have shown that milk thistle may be useful in alleviating the side effects of cancer treatment, and may even increase the effectiveness of chemotherapy in certain types of tumors or help destroy cancer cells.

In humans, we are still waiting for confirmation of the effects of silymarin in this context, but there is certainly no reason not to use the power of milk thistle.

An interesting fact: Many people are currently focusing on boosting their immune system. Learn how milk thistle in particular can help you in such endeavors!

Effect no. 5: Help for nursing mothers

Milk thistle has been used for centuries as part of folk medicine by mothers who need to support milk production for their baby. And how do the scientists see it?

One study showed that women who took 420 milligrams of silymarin for 63 days had 64% more breast milk than women who took placebo. So it’s clear why this herb has its place in the medicine cabinet of nursing mothers.

An interesting fact: Have you ever thought that milk thistle can help you even if you are just trying to get pregnant? Learn how fertility and the health of your liver may be related!

Acne can be a problem not only in adolescence, but often in adulthood as well. It’s difficult to clearly determine the cause of this disease, but oxidative stress in the body is also to blame, in addition to hormonal changes. And this is where milk thistle could help.

Whether this is the case was decided in a study in which participants took 210 mg of silymarin daily for 8 weeks. And the result? At the end of this period, their acne lesions were reduced by 53%.

An interesting fact: Think about detoxifying your body thoroughly? We have a few tips for you on how to finally succeed this year and effectively cleanse your body!

Effect no. 7: Hope for diabetics

Very often, the use of milk thistle is recommended for patients with type 2 diabetes, as it can help lower blood sugar levels.

The authors of a study found that people who took silymarin daily had lower blood sugar levels.

In addition, it has been speculated that the anti-inflammatory and antioxidant effects of milk thistle may also reduce the risk of some complications that occur in patients with diabetes. Further research is therefore planned.

An interesting fact: Milk thistle can also help with long-term and uncomfortable fatigue. You can read HERE how it can be achieved and why it was already used by the ancient Romans.