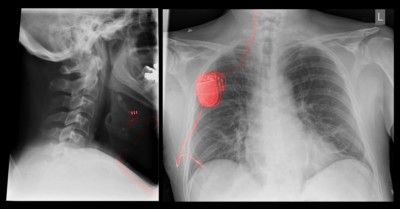 Millions of Germans suffer from sleep apnea at night, which deprives them of sleep. Also on the “day of sleep”, 21. June, these people will be exhausted and tired due to their disturbed night sleep. At the university hospital Regensburg (UKR) physicians make now possible with the innovative tongue pacemaker such sleep apnea patients again a restful night sleep.

Klaus Schuberth has been unconsciously awake many times a night for years. During sleep, his pharyngeal muscles slacken, the tongue falls back and blocks the airway – he can no longer breathe. Alarmed by the lack of oxygen, his heart beats faster, his blood pressure rises, and the respiratory muscles in his chest are activated. With success: His body pulls Klaus Schuberth out of sleep.

He catches his breath and is saved from suffocation. As a rule, Klaus Schuberth does not notice this reflex. But these frequent awakenings every night make the following day a torture: “I was a businessman, responsible for numerous employees and high turnovers. Due to my daytime sleepiness, I became too unfocused to continue to meet the demands of my position.

I had no choice but to resign,” says the entrepreneur from the district of Regensburg, describing the consequences that the nocturnal breathing interruptions had on his life and career.

“Current studies assume that more than twelve million Germans suffer from sleep apnea, and the number of unreported cases is high. Deep sleep is disturbed again and again. The effects for those affected range from daytime sleepiness to high blood pressure, which in turn is a risk factor for cardiovascular disease,” informs Dr. René Fischer, who heads the sleep medicine consultation in the Department of Otorhinolaryngology at the UKR and works with senior physician PD Dr. Veronika Vielsmeier offers a novel therapy procedure for sleep apnea patients.

“During an examination in the sleep laboratory, Mr. Schuberth was diagnosed with severe obstructive sleep apnea. Wearing a breathing mask at night is the standard therapy in such a case. The airways are kept open by means of overpressure. But the mask significantly disturbed Mr. Schuberth’s sleep.

For this reason, surgery was the only option for him,” recalls Dr. Michael Arzt. Fisher. Klaus Schuberth had the choice between a complex jaw operation, in which the jawbone is cut and moved forward, and the implantation of a so-called tongue pacemaker. He opted for the latter. “The tongue pacemaker consists of several individual components. The pulse generator, which is inserted below the collarbone, delivers an impulse to the lingual nerve via a stimulation electrode.

A pressure sensor measures breathing during sleep and transmits the time of inhalation to the pulse generator. At this moment, the electrode on the lingual nerve triggers a gentle contraction of the tongue muscles,” reports PD Dr. Vielsmeier. Thanks to this new high-tech treatment method, the airways remain clear at night and sleep is undisturbed.

“The first patient we treated with this technology a few months ago can now finally return to his job as a professional driver. Before the therapy he had about 45 breathing pauses per hour during sleep. This significantly increases the risk of microsleep at the wheel and is associated with a high accident risk.

His nocturnal waking phases are now within the harmless, normal range, and the patient is very satisfied,” says a pleased Dr. Fischer on the success with the still young technology. 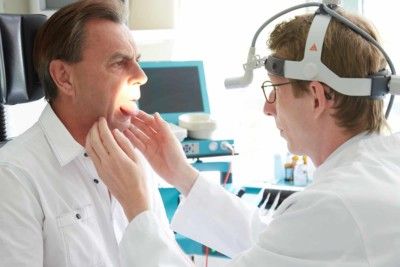 Full range of therapies for sleep apnea patients at the UKR

The severity and type of sleep apnea are determined at the University Hospital Regensburg in the sleep laboratory of the Clinic and Polyclinic for Internal Medicine II (Head: Professor Dr. Michael Arzt) diagnosed. There are already many established therapies for sleep apnea: For a mild form of the disease, the cause of which is sleeping on the back, positional therapy can help.

A change in diet or orthodontic treatment also lead to relief of symptoms for many patients. For moderate to severe sleep apnea, positive pressure therapy via a breathing mask is the standard therapy. It keeps the upper airways open during the night by means of a generated overpressure. However, the breathing mask is not tolerated by every patient.

In this case, the tongue pacemaker is a good and possible alternative. The so-called hypoglossus stimulation is the latest therapy method for patients with obstructive sleep apnea. Two different systems are currently available. “We can offer both systems and thus have the opportunity to find the best individual solution for each patient, regardless of the system,” notes Dr. Fisher out.

As part of the sleep medicine consultation he leads (make an appointment at 0941 944-9442) at the Department of Otorhinolaryngology at the UKR, Dr. Fischer works closely with orthodontists and sleep physicians at the UKR to find the best way to help patients with sleep apnea sleep through the night again.

Klaus Schuberth survived the implantation well. In a few days, the pacemaker will be activated for the first time, so that it will soon be able to move the tongue forward a little each time the patient breathes in at night and finally enable restful sleep again.

Top in medicine. Human in the encounter.

As the youngest university hospital in Germany, the University Hospital Regensburg (UKR) treats about 35 patients per year.000 inpatients and approx. 142.000 outpatients. For this purpose, the UKR has 839 beds and 52 day-care treatment places available (out of a total of 1.087 university-operated beds of the Faculty of Medicine at the University of Regensburg). The University Hospital Regensburg employs more than 4,000 people in 28 human and dental clinics, polyclinics, institutes and departments.600 employees.

The University Hospital Regensburg is focused on high-performance medicine, especially in the fields of transplantation and intensive care medicine as well as oncological and cardiovascular diseases. In terms of average case severity (“case mix index”), the UKR is at the top of German university hospitals. In addition to providing the highest level of patient care, the UKR, together with the Faculty of Medicine at the University of Regensburg, is responsible for the training of approximately 2.He is responsible for the education of more than 000 students (human medicine and dentistry) as well as for medical research. The common goal of all employees is the optimal medical and nursing care of the patients as well as an appreciative cooperation in the team.